Fairies don’t change seasons. And here is why.

Have you ever thought why did the authors of the films about Disney fairies practically abandoned the idea of changing seasons? This notion that was postulated in the first film wholly disappeared in the later episodes. Can we scientifically test this hypothesis and come to a conclusion, how plausible the idea is? Let me stress it: testing of this idea isn’t just wild speculation. We have science on our side to back it up or to prove wrong.

Hypothesis: the fairies don’t actually change seasons. They contribute at most.

Let’s take a look at this scene and estimate how fast a fairy can melt snow: Let’s be generous and overestimate her abilities: 42 cubic centimetres of snow per second.

Next, we need to know how much snow melts every spring in Russia. Yes, Russia is always a problem, and soon you’ll see why. Alright, the total area is 17 075 200 squared kilometres (https://www.nationsencyclopedia.com/eco ... ussia.html).

Now comes the tricky part. First, I found a dissertation
https://meteoinfo.ru/images/misc/sovet/ ... zakova.pdf
about a mathematical model of the evolution of the snow coverage depending on weather conditions. The author cites some statistics of meteorological data. However, as is turns out, the data about the snow height is available for everyone:
http://meteo.ru/data/165-snow-cover

The average value is about 30 cm.
https://drive.google.com/file/d/136RTZo ... sp=sharing
Keep in mind that this data is from 567 meteorological stations which isn’t much in comparison to the whole area. Well, if we take the average data from 2000 till 2005. And if we make some calculations: 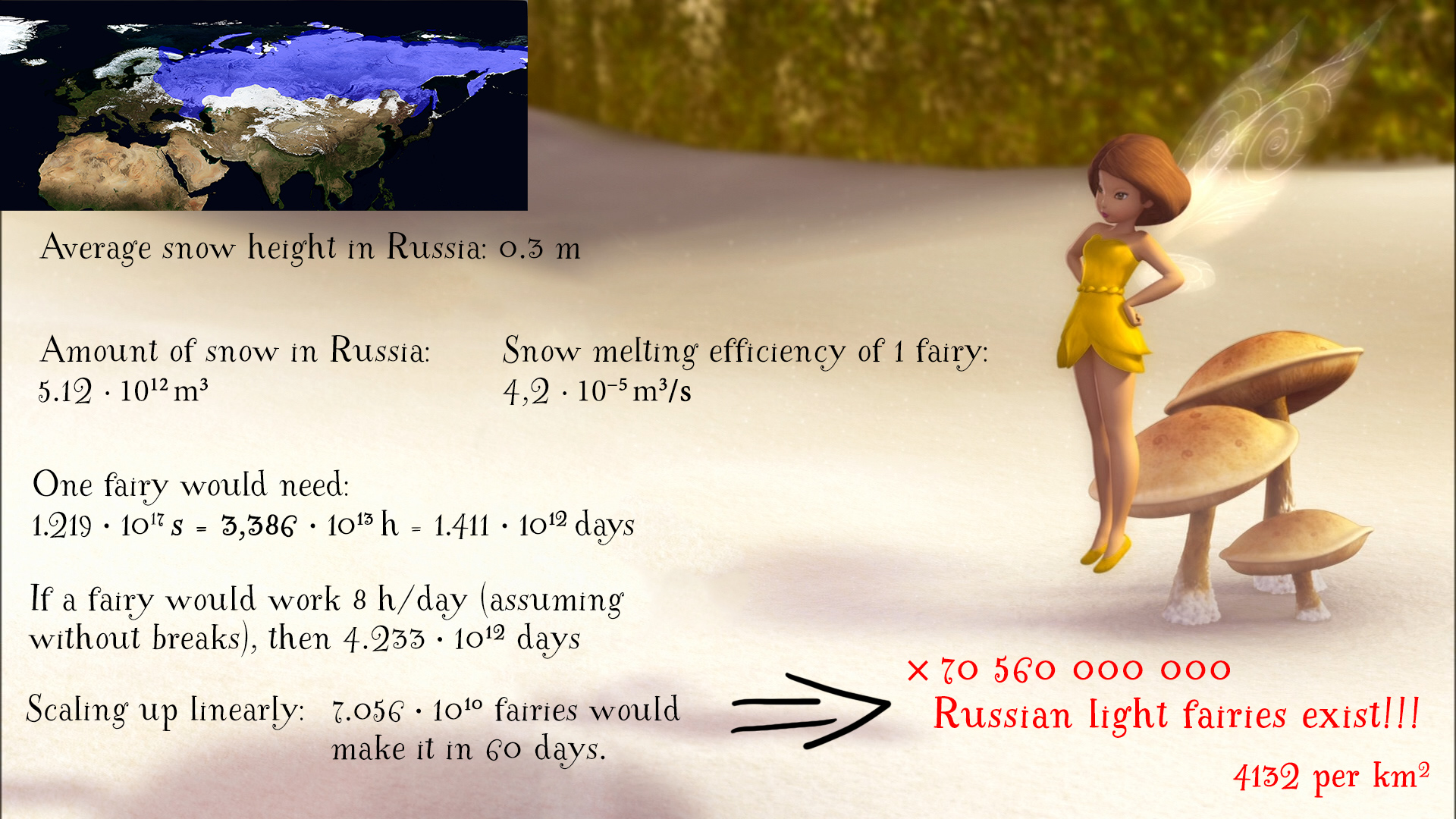 …We’ll get this insanity! 70,5 billion Russian fairies (only light fairies!) must exist to melt the snow in two months or so. About 4000 fairies per square kilometre! Which is totally ridiculous in terms of logistics even in a fictional world.

And it gets worse if one still tries to defend the idea. If the readers are curious, we might calculate the other aspects of thermodynamics of the Earth.

That means that fairies alone cannot be responsible for the change of the seasons. At most, they could be considered as a contributing factor, as humans contribute to climate change (don’t ask me to what extent), but don’t cause it in the first place.

Conclusion: fairies aren’t responsible for the change of seasons.

Return to “All About Disney Fairies”